A question to my English-speaking friends: how would you call this mythological being in one word: https://en.wikipedia.org/wiki/Domovoi

Photoes are made in the park on March, 22. 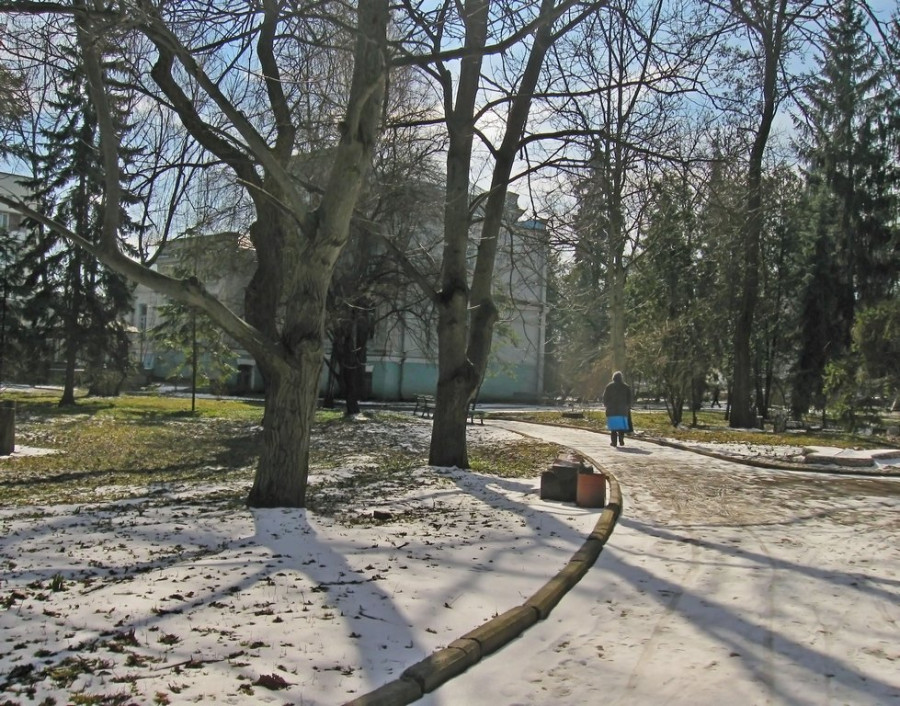 The last week turned out to be full of social events, namely of those closely connected with creative activities and art. Just in contrast to the high temperature of that social life the weather was colder than earlier. After the extremely warm days at the beginning of March we had snow and cold wind again, and for several days already the temperature is often below zero.

Now in detail. On Wednesday I visited a presentation of an audio album that is devoted to all seasons of the year and includes twelve soundtrecks of poetry and music consistent with the twelve months. The poetry is by IK, my friend, a poet and a bard, and the music is by SK who is a bard too. in six soundtrecks recited poetry is just "decorated" by music, and the six others are songs by SK to the poems by IK. The presentation meant live performance of the soundtrecks from the album. We also saw a kind of master-class: one of the poems was performed three times - firstly, as a simple poetic text, then as a song to the accompaniment of a guitar, then in a more complex arrangement as a part of a video film illustrated by photo by VT.

I love poetry by IK. It is a kind of postmodernist idyl with irony and interplay of meanings taken from the history of culture. But irony in his poetry doesn't intefere with the warmth of love and craving for the good. I'm especially impressed when he recites his poem in public.

And on friday I was present at the opening ceremony of an exhibition by MJ, and artist who some fifteen years ago taught me how to paint in oil. I had loved his landscape painting, but this time I was given an opportunity to see quite a deal of his portraits. Some people compared his portraints to icons, some said that they look much like people from other planets. The point is that persons on his portraits seem always to be concentrated on some inner mystery. And trying to guess this mystery is a sort of spiritual adventure. A very original artist, and although I've seen his painting a lot of times I have a strong wish to see the exhibition once more.

On Saturday there was one more event that I failed to visit. Our Chekhov Museum invited people who wished to talk about Nikolay Rubtsov, a Russian poet of the second half of the twentieth century. I didn't like his poetry earlier, but now I seem to enjoy some of his poems. My friends say that he is not an intelectual poet, that he appeals directly to emotions. Now as I read his poems at home I begin to enjoy them and agree with my friends... For a time being...

I still don't have any desire to resume working with oil paints. But i've started writing essays about our town's latest cultural events for our local sites. It looks like they enjoy some popularity. And I enjoy writing them too. I'm trying give both the information about the event and my aestheticjudgement on it. It is a job I'm very interested in.

However at the same time I help RVS with the book on the landmarks of our town's history. That means working with different sources, comparing and proofreading the final text. And often I'm very tired after it. Sometimes working at the book replaces all other activities....

Something like a self-portrait. My last work in oil.
You can see more of this series here: http://plus-gallery.net/users/vasmapr/photos/private897.html 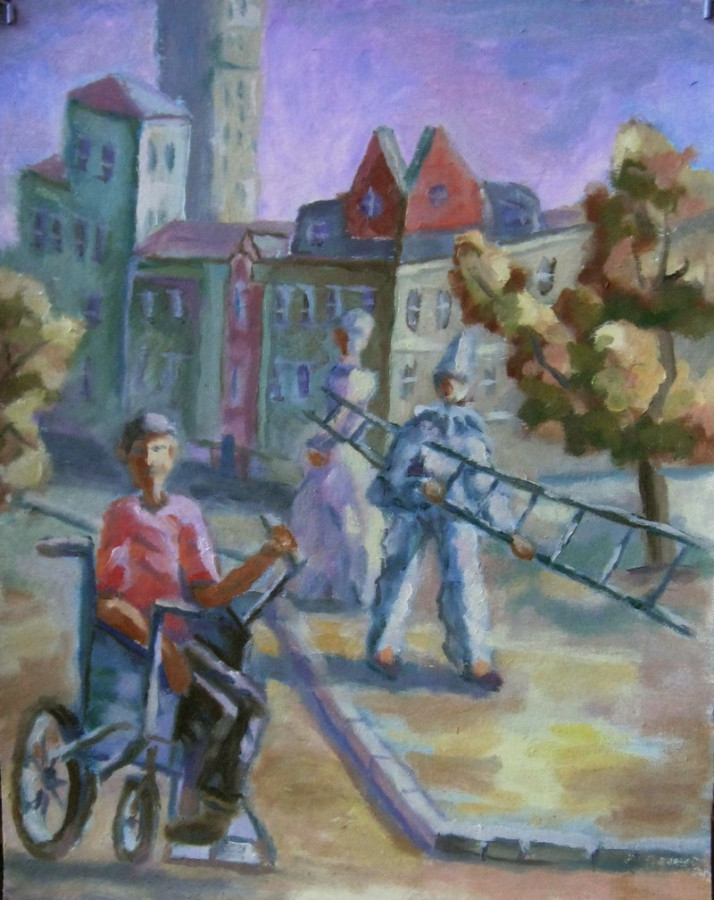 This week turned out extraordunary warm as for early March - more than ten degrees above zero. And I used this time for making sketches outdoors. I feel that I'm just hungry for drawing from nature and can't resist this desire any more. it is so strong that cannot concentrate on anything else.

My dayly routine at present includes a thorough morning exercise - I make five or six circles in my wheel-chair in the park. The day before yesterday I had an accident. The cover tyre of one of my wheels got broken, the inner tube was blown out in large bulb and eventually bursted. Maybe people around me thought it was an act of terrorism. The only thing I could hope for was my family technical assistance... My father came to my rescue with a spare wheel.

Then, after breakfast, I usually go to the park once more, this time with everything ready for watercolour sketches. I made several sketches in sunny weather. But today the sky was overcast, and my sketch went wrong to the extent that I tor it to pieces.

And when I come home from my dayly sketches I feel so tired that cannot do anything else.

But two events stood out in my dayly routine. On March 6. I was present at a lecture by SG, our clubman who had recently come back from a jouney to Jordan. He showed us quite a deal of photoes, and it was very interesting. I especially liked the pictures of the ancient Petra. An amasing town!

And on March 8. my friends took my to a picnic in the forest. We saw the first scilla coming out from under last year's leaves. And some ant hills with its inhabitants already awakened from their winter sleep.

In the forest there was a sports ground with asphalted paths used for skiing in winter and for roller-skiing in summer. And I used these paths for going downhill in my wheel-chair at hill. it was a kind of entertainment very much like that of a small child....

Winter has come to an end. This February was very warm, and almost all the snow that we had in January has now  melted away. I'm already looking forward to fishng and making sketches in the open air. Meanwhile I enjoy long trips in my wheelchair in the adjucent park and has almost abandoned my work at our club's site.

This winter I had much work helping RVS finish the book on the landmarks of our town history. As one of the finishing touches I had to add some information about political parties in Sumy during first Russian revolution. And, in the whole, I learned quite a lot of new interesting thinge about our town's past. I was very surprised to learn that even one of the greatest Russian symbolist Alexander Blok once visited our town.

Now that the main job is done I can relax a bit. But soon I'll be busy sorting out photoes for the book. My friends from our artist studio made some sketches  of our town last Autumn, that will also be added to the book.

My work at the book didn't mean that I stopped painting. During winter months I managed to finish seven small pictures in oil. I did them partly from ny imagination, partly using the sketches I had done im summer. These are town landscapes with human figures on the foreground. This Autumn, for the first time in my life I felt that I can paint himans in the way I need it. And I realized this vision in that series of paintings. Now I feel that I've run out of the initial inspiration and need to come in contact with nature again, That's one more reason why I'm looking forward to sketching in the open air with impatience.

One more series of winter pictures. There was only one day of hoar-frost in our town. On this day I managed to go to the nearby park for the first time after the snowfall.
The tenperature was lower than 15 below zero, and I had to put hands into my mittens each time after making one or two shots. 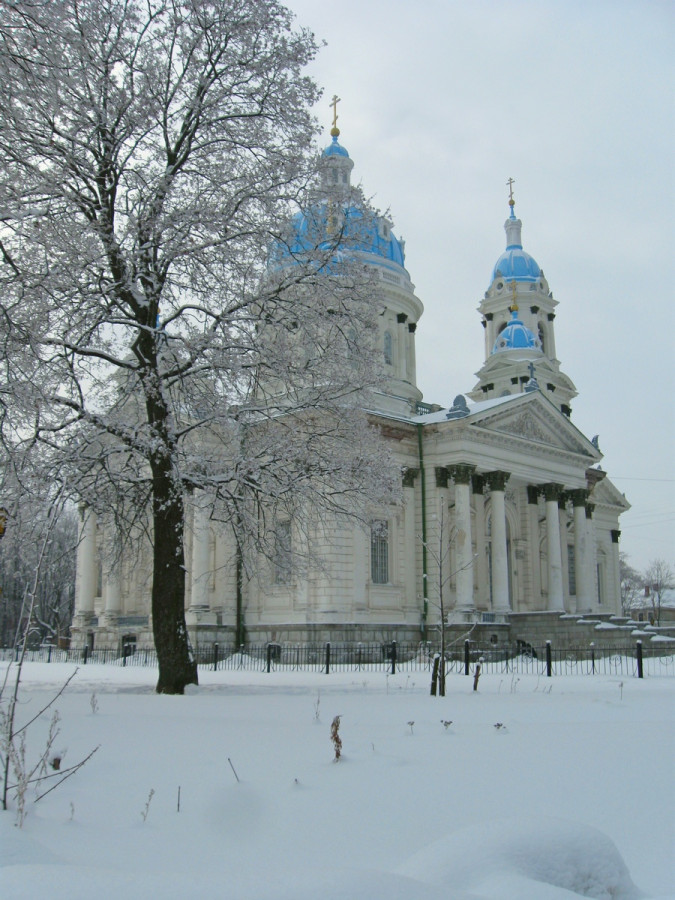 Some more photoes of snow in our town. They were made by my father on the first sunny day after the snowfall. 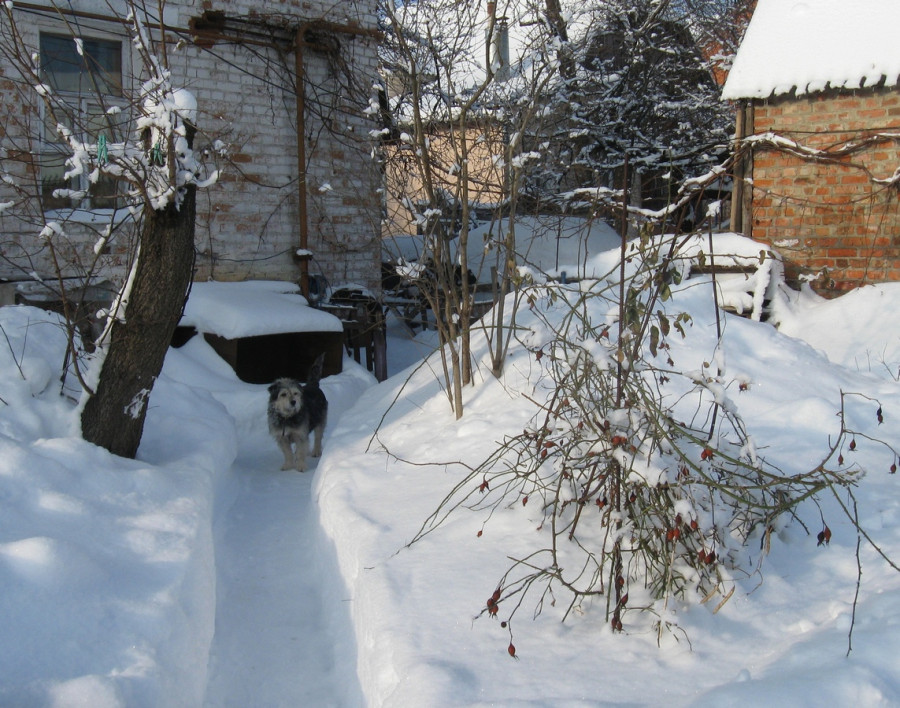 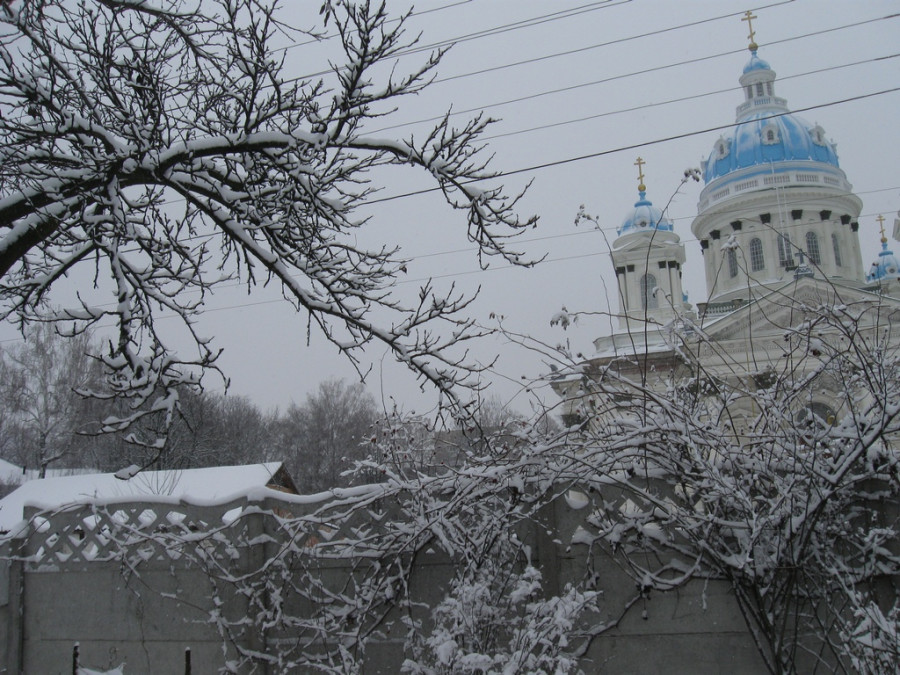 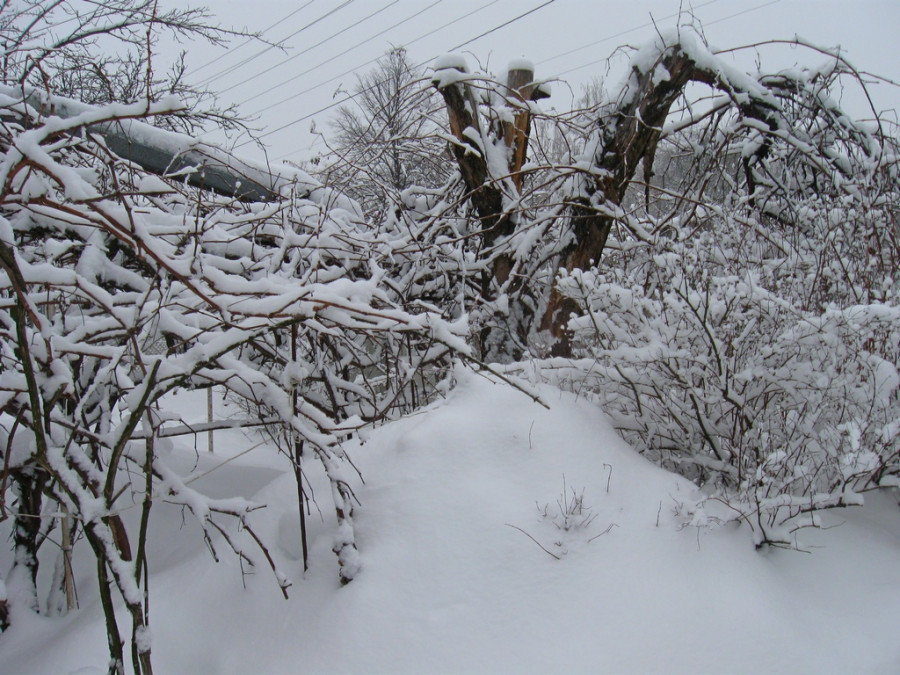 On Saturday afternoon and evening I had a number of adventures. And I think each of them deserves a separate post. the point is that it was the Night of Museums in our town. Six art galeries took part in this event. Each galery arranged new exhibitions, concerts, theatric shows and many thing for day. Our painters' group had to make a masterclass in drawing for passer-byes in front of the Academy of Banking where the Galery of Modern Art is situated.

We divided into three groups: some of my fellow-students gave a lesson in drawing for the smaller children The others invited passer-byes to take part in the game of crocodile. One person had to think of some word and whisper it to his neighbour who was expected to draw that word on a big canvas. And everyone tried to guess that word from the drawing. A bit later holes were made in the canvas, and everyone could any picture he or she wished and make a photo with in face in the hole. 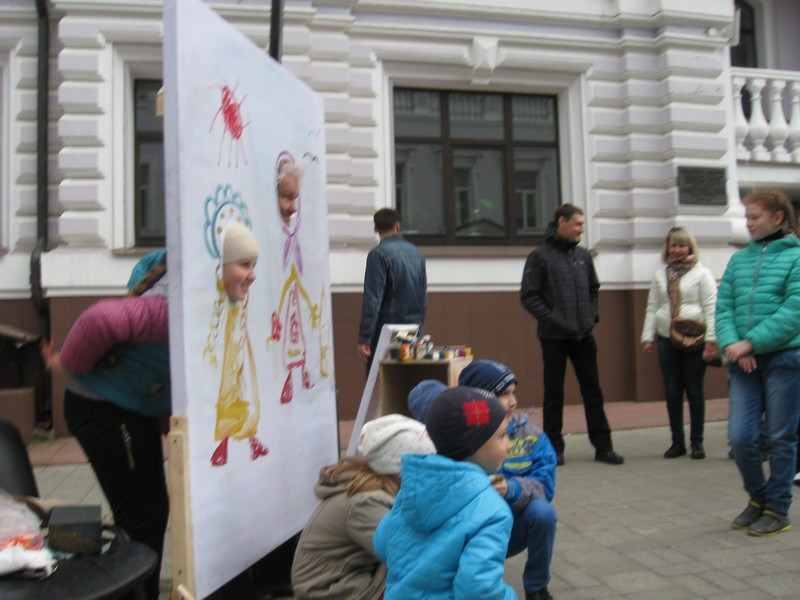 Beside that there was a still-life with a teddy-bear placed just in the street, and anyone could draw it using sanguine and white chalk - under the guidance of our teacher. 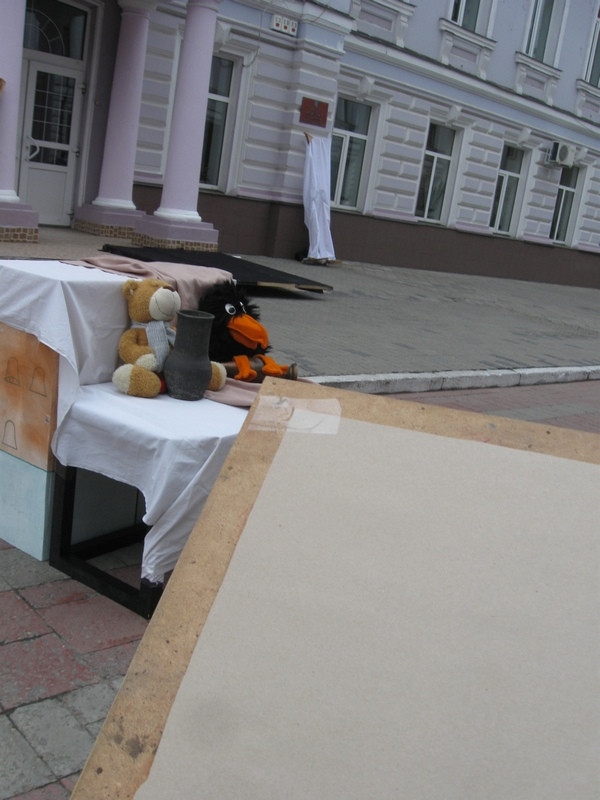 As for me, I spent most of the itme drawing the teddy-bear. I was a sort of live bait inviting others to join me. 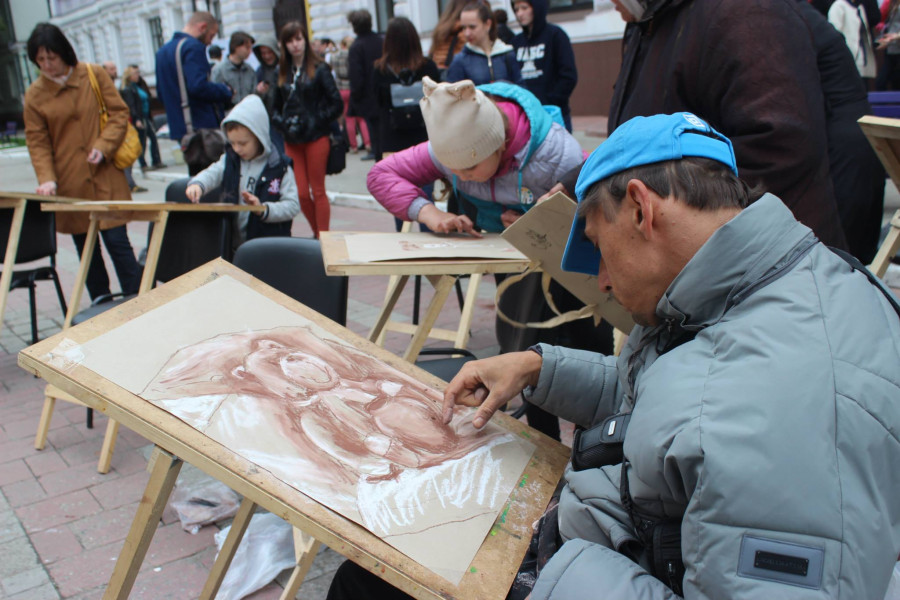 After the masterclass we had so many pictures of the teddy-bear arranged in a row. 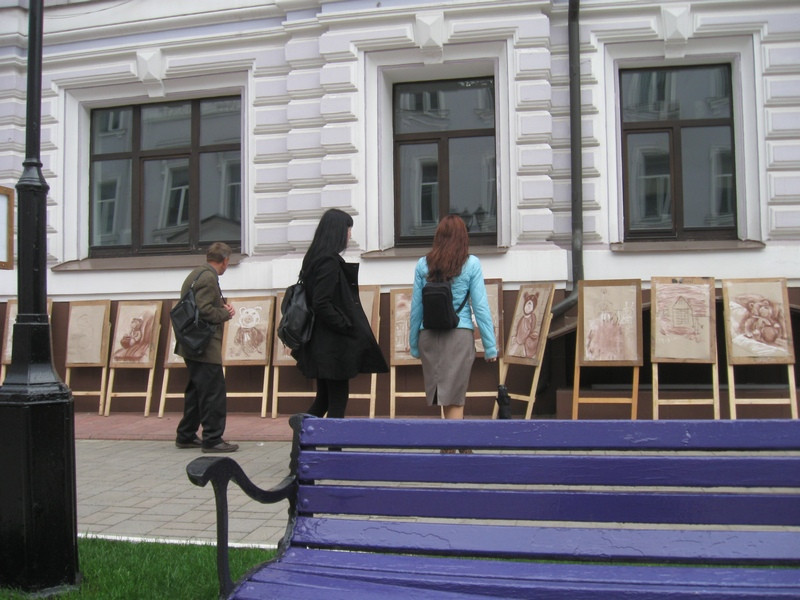 And after the masterclass I was taken top a place which I had never expexted to vist earlier. Four strong men had to carry me in my wheel-chair down a steep staircase to the Galery of Modern Art which is situated in the undergroung. There was an exhibition of photos about the land-art festival which is held every year in the country near our town. The photos were hang on rough planks with remnants of bark on them - to create the atmosphere od wild nature in the galery.

There was also a visit to an cafe, an imoprovised cinema show in the open air with the screen hung on the first floor balcony of the Academy of Banking and a theatrical show. I returned home nearly at midnight. For all this I should be grateful to my friends who take me everywhere.
Collapse